"You can't stop me son. Imma dance around you all night long!"
—Omar Epps as O.E.

Omar Epps is an accomplished young actor, singer, songwriter, and record producer. He's starred in many films, notably Love and Basketball, The Wood, and Juice. Omar has played a tough character in film and television, but he's no slouch off camera either. Born Omar Hashim Epps in Brooklyn, New York, on May 16, 1973, Epps was raised by his mother, an elementary school principal. He attended both the Fiorello H. LaGuardia High School of Music and Art and the New York High School for the Performing Arts. His performances were consistently solid. In John Singleton's film Higher Learning (1995), Omar Epps earned particular acclaim for his portrayal of a young man attending college on an athletic scholarship. Around this same time, Epps also excelled in a brief recurring role as an emotionally stressed intern on E.R.; he would later identify that role as the one that made it possible for audiences to finally put a name to his face.

In Def Jam Fight For NY, he brings the pain as a street fighter. Omar works for Crow in the Fight For NY, but can be swayed to join D-Mob's depending on the choices you make. You'll find O.E. once you beat all the fighters in the Foundation. O.E. appears later at The Chopshop after Ice-T offered to team up with Hero with O.E. giving the same offer. If you didn't choose O.E. in the Chopshop tournament, he'll send a voice message telling the player it's not over yet. You'll also face him in the one on one tournament in the Gauntlet.

If fighting for the Brooklyn Crew, O.E. and Meca gets into an argument at the Babylon. The beef is settled after the protagonist defeats them both. 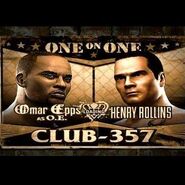 Add a photo to this gallery

Retrieved from "https://def-jam-wrestling.fandom.com/wiki/Omar_Epps?oldid=13515"
Community content is available under CC-BY-SA unless otherwise noted.